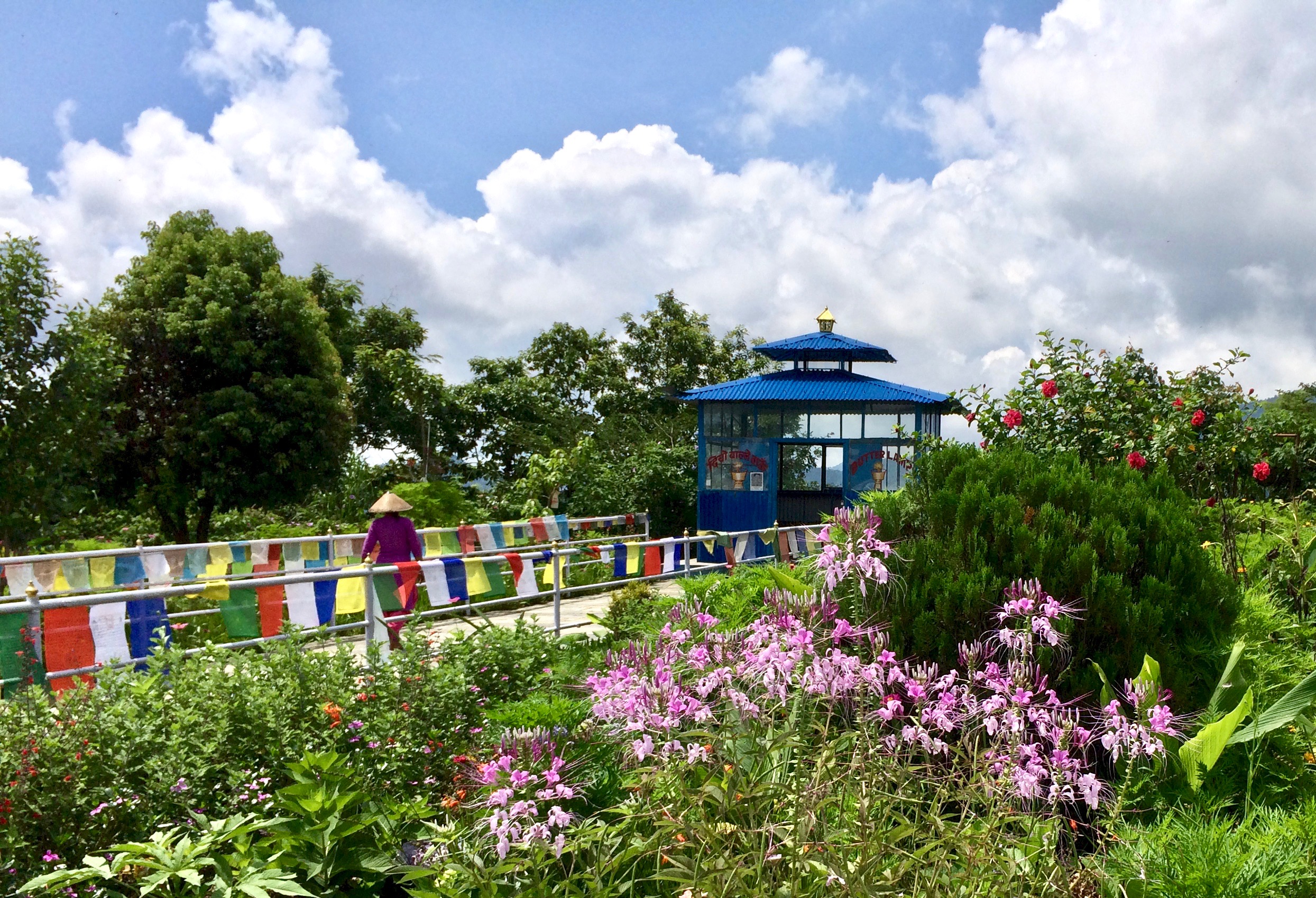 Walking around Pokhara along the banks of Lake Phewa, you would likely notice it. A brilliant white stupa, gleaming on top of a high hill ridge southwest across the water. This is the World Peace Pagoda of Pokhara.

Getting to the World Peace Pagoda

There are two approaches to the stupa. One is by hiring a boat, crossing Lake Phewa to the bottom of a steep stairway that goes up to the stupa. The other is from the damside, either by hiking along the lake or by road transport to start at the stairway to the stupa complex*.

My guesthouse had recommended that I take a driver to the stupa entrance. That way I could make the visit a part of a wider day tour to other places, such as the Tibetan refugee camp craft museum and nearby Davis falls.

If you go for this option, the drive is not very long from Pokhara Lakeside. There is a parking area at the base of a long stairway to the top of the hill. You could also stop by for a meal at the restaurants lining the parking lot.

* There are mugging warnings for hikers along this trail from a few years ago – both the steep hike from the boat landing, as well as the longer route from the lake’s damside. The current safety situation is unclear and may have improved. The hike up the hill

From this point on, the entire hike up is via a series of concrete paths and steps in an open setting.

All along the way you will periodically come across restaurant buildings perched on the slopes.

These would often have rooftop access for incredible views of the lake and of Pokhara town. If you’re doing this hike in the summer, the cold drinks and ice cream would be very welcome.

All in all, it is a fairly easy hike.

Tip: There are plastic recycling bins along the route set up by what appears to be the local plastics plant. If for whatever reason you bought a plastic bottled item, do hang on to it until you come across one of these. Opening hours for the Peace Pagoda

For those who have made their way to the gate of the stupa by cycling, this is as far as you can take your bicycle.

The white stupa of the World Peace Pagoda commands your view as soon as you cross over into the threshold. It lies at the end of a straight path lined by Tibetan prayer flags, and is surrounded by a flower garden. Monks in dark saffron robes stroll around the complex.

Paths branch out from the main route to the stupa to other shrines and benches. Saunter to the edges of the garden near the hill slope, and enjoy some of the best views of Pokhara. I had not realized how large and sprawling the town was until I saw all of it from up there. The World Peace Pagoda is a Japanese Buddhist stupa. Having arrived in Japan 1400 years ago, Buddhism established itself in the land of the rising sun, leading to various sects and organisations to spread its teachings.

The Nipponzan Myohoji is one such organisation. It was founded by a witness of the atomic bombing of Hiroshima and Nagasaki. This inspired in him a sense of urgency to spread the message of peace, which he decided to accomplish by building 100 Peace Pagodas throughout the world.

The Nipponzan Myohoji was further inspired by a 700-year-old prophecy, foretelling the restoration of Buddhism in India by Japanese Buddhists. So they built one of the World Peace Pagodas in India in Ratnagiri in 1969.

The Pokhara Peace Pagoda was the 71st in line, and the first one built in Nepal – where the Buddha was born.

Paying respects to the white stupa

The stupa sits at the top of a two-tiered platform. A neat and simple construction, it is fronted by a gold statue of the Buddha in a cross-legged posture, and houses relics of the Buddha within.

Circle around the stupa, and admire reliefs depicting scenes from the Buddha’s life.

Footwear must be taken off before ascending the stairs to the stupa.

Tip: the floor of the platforms can get really hot in the summer mid-day. It may be better to time the visit to avoid this time. Please behave respectfully and maintain silence when on the stupa platforms.

Courtesy of: Teja on the Horizon

Teja is an environmental scientist (to which she admits) and an engineer (which she disowns), but having been excessively self-educated in all manner of erudition, is really far too many things for one person to be. She is on an odyssey for homes in a thousand strange places, because predictably, she’s doing the Ibn Battuta quote backwards. Teja likes to write about the stories that happen around the travel plans, coloured with the lens of sustainable travel. 5 Must See Sights on the Greek Island of Corfu

US Visa – One of the Powerful Visas in the World

Best Islands to Visit in Greece